What is lumens in lighting, foot candle, candela - northerncult blog

Have you ever thought about what is lumens in lighting? Why is it so important while buying your next light, especially when it comes to LED. Normally we all check the wattage of the LED Lights before choosing the lights and we all know to do it, but gone are days when the strength of light bulbs was measured in watts. It was our mindset to look at wattage on the light packaging to know how bright it would be.

But actually, wattage rating has nothing to do with how bright the bulb is. Newer types of bulbs consume much less power compared to old-style incandescent light bulbs. For eg. LED light bulbs spend over 90% of their input energy on light instead of heat.

The new unit of measurement for light bulbs is Lumens. So lumens meaning or whats Lumens in lighting scale describes how much light or brightness the human eye can perceive – the higher the number of lumens, the brighter the light. For example, an average 100-watt incandescent bulb can produce about 1,600 lumens. All modern light bulb packaging shows how many lumens the bulb can produce.

The right way to measure the efficiency of any light source is based on how many lumens they can produce per watt. We consider kilometers per littler to measure the fuel efficiency of the car, just like the lumens-per-watt rating to check how energy efficient the bulb is. 9 to 12 watts LEDs can produce the same number of lumens as standard 40- or 60-watt bulbs.

So if you want to replace a 60-watt bulb, go for an LED bulb that produces close to 800 lumens; while for a 40-watt bulb, go for 450 lumens. One thing for sure is that lots of brands produce LED lights having their own standards. You can choose the best one considering the following guidelines.

Let’s take an example, your requirement for the 2BHK home lighting is 14300 total Lumens. Now, if you purchase lighting with 110 lumens-per-watt (tagged as Best Quality Standard in the chart), you just require 130 watts of power consumption.

This is almost 56% more compared to lighting with 110 lumens-per-watt.

The next important thing while choosing the best LED Lights is that no doubt you can save a good for opting light with higher Lumens-per-watt, but you may have to pay a bit more as light offering higher Lumens-per-watt are quite expensive. However, this would be the initial investment, as the cost will be recovered by its amazing power-efficacy in less than 2 to 4 years.

So, whenever you look for the best-Led Lights, you should first search for the bulbs that produce the number of lumens you want for enough brightness. Then, check out the lumens-per-watt rating to find the bulb that is the most energy-efficient.

Note: Light Packaging doesn’t show lumens-per-watt directly, takes total lumens that shown on the packaging, and divided by Wattage, and the product will be lumens-per-watts. So let’s see in details what are lumens in lighting, candela and foot candels.

WHAT IS WATTS IN LIGHT?

Watt is the electrical unit for the rate at which energy is generated or consumed. The Wattage of the light is the amount of energy it takes to produce a certain amount of light. The higher the wattage, the brighter the light, but also the more power it uses.

So, when you turn on a lamp with a 100-watt bulb in it, it’s drawing 100 watts of electricity for every second it’s lit. It is important to note that when buying light bulbs, wattage does not equal brightness, Since LEDs have different lumen output based on the quality of LED chip they use.

WHAT IS LUMENS IN LIGHTING? 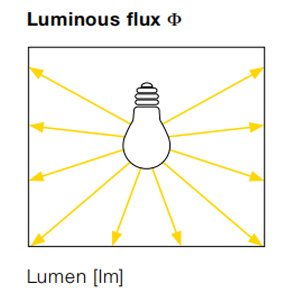 Lumens in lighting refer to the total amount of light a lighting apparatus emits. We represent lumens as lm. The higher the lumens value of a lighting device, the greater the area it illuminates. The lumens unit does not consider the spread or divergence of the light being emitted by the device.

Lumens = Light Output. In simple terms, Lumens (denoted by lm) are a measure of the total amount of visible light (to the human eye) from a lamp or light source. 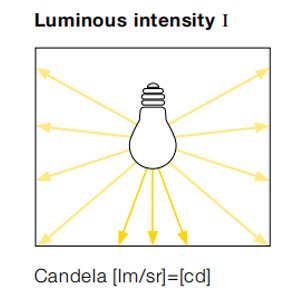 Candela refers to the amount of light emitted by a lighting device in a particular direction. Candela is another word for candlepower. Candlepower measurement is from times when the candle was the primary source of illumination. One candela is approximately equal to the light that a candle with specific dimensions, produces.

CANDELA VS LUMENS : WHAT IS THE DIFFERENCE?

We use both lumens and candelas to measure the luminous efficacy of lighting devices in industrial settings. The following equation roughly describes the relation between candelas and lumens.

Knowing about the difference between lumens and candela will help you choose the appropriate lighting device for your premises or space you are trying to illuminate. For instance, you need to install lights in a office premises to illuminate the objects in an area. Proper light is necessary for corridors and storerooms so that employees can move around easily. In such cases, you will need to concentrate on the lumens value of a lighting device.

The greater the lumens value, the lighter the device emits, and the larger will be the area that it illuminates. On the other hand, some of the employees may work with intricate devices and need overhead lights to shine directly on the objects they are working with. In such cases, you will have to buy lighting devices after comparing their candela values.

WHAT IS FOOT - CANDLE?

A foot-candle equals one lumen per square foot. This is a British measurement. Using the metric system, a lumen is measured by a square meter or a lux. Thus a foot candle is equivalent to approximately 10 lux or 10.57 lux.

DOING YOUR OWN CALCULATIONS

Calculating and converting is very easy and shouldn’t take very long to do once you get used to it. As the number of lumens is just over 10 x foot candles. 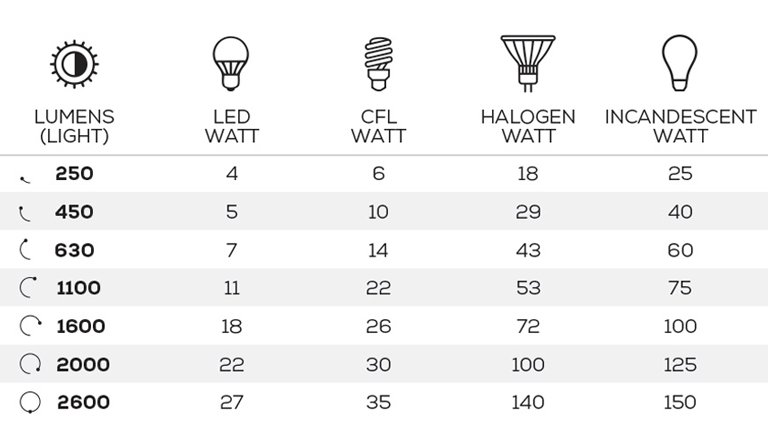 The Lumens chart with the comparison of LED lights with other light sources like CFL, Halogen, and Incandascent will make it easier to understand how Energy-efficient bulbs such as LED light bulbs or CFL bulbs use less wattage than a standard incandescent, halogen light bulb, or incandescent bulb. But even though an LED bulb uses less wattage, it’ll have more lumens than a standard bulb. For example, a 4W LED bulb is 250+ lumens, while the same amount of lumens can be found in a standard 25W bulb.

A standard bulb uses more energy to produce the same amount of lumens as an LED bulb. This goes to show that you can achieve the same brightness with less wattage or energy. More lumens per watt means your light bulb is more efficient since more light is produced with less power. So the LED lumens chart will help you to pick the right replacement of existing light bulb with LED.

Candles are more useful to in film and video business and what you’ll see listed in the specs for an industry light that we listed with a distance like 1 meter or 3 feet which is 1 meter but without that distance it’s useless far the way you get from the light the lower the light level goes down so you need to know what distance that missional was taken from otherwise it’s meaningless.

Lighting designers, Interior designers and architects  designers have very complicated formulas, softwares and tables that help them figure out the total number of lumens needed to light a huge office space in the day or a large warehouse very important when you have to order thousands if not tens of thousands of fixtures and lights to illuminate every single floor in a skyscraper probably don’t want to get your calculations.

FAQS about lumens in lighting

What are lumens in LED lights?

Lumens in lighting refer to the total amount of light a lighting apparatus emits. We represent lumens as lm. The higher the lumens value of a lighting device, the greater the area it illuminates. The lumens unit does not consider the spread or divergence of the light being emitted by the device.

Lumens = Light Output. In simple terms, Lumens (denoted by lm) are a measure of the total amount of visible light (to the human eye) from a lamp or light source.

How many lumens should a light be?

It depends on the type of the room, space like for residential, or offices and what it's used for. As a handy rule of thumb, a living or bedroom will generally require around 10-20 lumens per square foot, while a task area like an island, makeup area, or kitchen will need a stronger level of lighting, at around 70-80 lumens per square foot.

Lumens measure brightness from a light source, but in order to calculate how much light you receive on a subject area you need to measure Lux level, For example, a 60-watt incandescent bulb produces about 800 lumens of light. By comparison, an LED (light-emitting diode) bulb produces that same 800 lumens but uses only about 8watts or 9 watts.

5 TYPES OF LIGHTING CONTROL SYSTEMS AND THEIR GREATEST BENEFITS?

Enter your email address and receive the Discount coupon in your mailbox to claim free shipping!